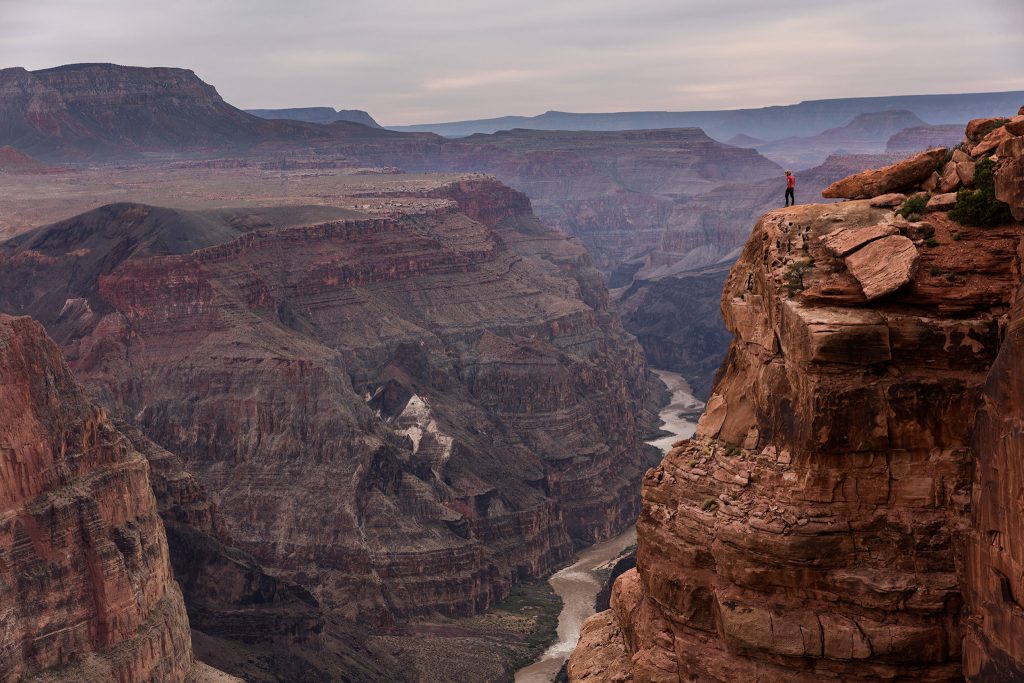 Hello, MPL fans! Welcome back to our weekly recap column. I hope you enjoyed Week 2’s matches, they were pretty intense!

So, it seems like the gap is widening between the strong and weak teams, with some teams climbing higher and higher, while others fall down the ladder to the bottom. Meanwhile, some of them have managed to turn their bad luck around and are now on firm ground, for the time being at least. Here are the results, and standings chart: 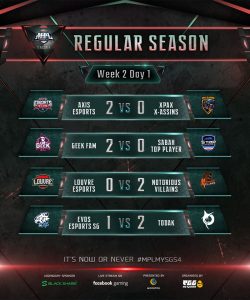 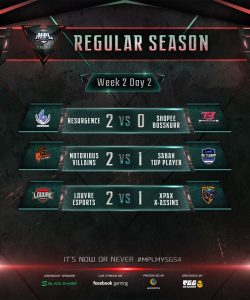 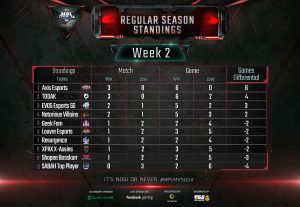 First up, let’s talk about Todak. These guys are really on fire, and like their namesake the todak (swordfish), they’re smashing their way through any obstacles. Despite being a new team, they’ve already taken down veterans in teams like Louvre Esports and Shopee Bosskurr.

And, not content to stop there, in Week 2 they defeated the Singaporean titans EVOS Esports SG as well, breaking the winstreak that EVOS Esports SG has maintained so far! Kinda fitting, if you remember the legend about swordfishes attacking Singapore.

At least it wasn’t a total wipeout, and EVOS did fight hard to try and win their match, ending it with a 1-2 score.

I’m not really sure if it’s beginner’s luck or something, but team Todak has definitely worked hard to earn their victories, and it’s gonna be interesting to follow their progress for the next 4 weeks (and through the playoffs, if they make it that far).

Knowing EVOS though, they’re not gonna take this defeat lying down, and will strike back even harder to avenge themselves. Whether they’ll fulfill the second half of the swordfish legend (where Singapore’s army defeated the fishes and killed them all) remains to be seen.

Meanwhile, Axis Esports is still rising, delivering a crushing defeat to XPAX X-Assins with a 2-0 blowout. After a less than stellar performance at last season’s playoffs, and the return of Lacid this season, they seem to have regained their form and are itching for victory.

When some teams rise, others must fall too, and it’s been a sad week for the teams that fell even further down the rankings.

The former pride and joy of Malaysia, Shopee Bosskurr, is still in crisis mode with the departure of their star player Fredo, and lost both their matches this week, with the second match (against Resurgence) seeing both games end in less than 10 minutes each.

Even when they were known as Airasia Saiyan back then, they were never the best Malaysian team, but they did have a lot of support and played pretty well. Now, though, it’s kinda painful to see all the comments bashing them on social media for their poor performance. Their former glory seems far away, but maybe they’ll be able to reclaim it if they push themselves as hard as possible in the remaining 4 weeks.

Sabah Top Player is also still underperforming, with their only standout so far being the single game they won vs XPAX in Week 1. Unfortunately, they had to face Geek Fam (who’ve been underperforming themselves recently) this week and got smashed up badly, losing 0-2. STOP does have skilled players, but I think the lack of experience in a major tournament environment is hurting their performance.

Speaking of XPAX, they aren’t looking so good either, losing both their W2 matches to Axis and Louvre Esports. They’ve been underdogs all along, and that doesn’t seem to be changing anytime soon, unless they can pull off a drastic change.

Of course, pulling off changes and turnarounds is possible, it’s just hard.

The Singaporean team Louvre managed to claim a win this week by winning 1 match, though their footing is still kinda precarious, since they’re currently at 2 losses (Week 1 Todak, Week 2 Notorious Villains) and 1 win (Week 2 XPAX). They have the benefit of fielding experienced players (Ly4Ly4Ly4, WQxD, and JasonKoh) from the disbanded Bigetron SG, so they probably just need to find their footing and adjust their teamwork to mesh.

As mentioned above, Notorious Villains is also rising back up after their poor showing at S3’s playoffs and lackluster performance vs Bosskurr in Week 1. This week, they managed to defeat both Louvre and STOP, though admittedly both those teams haven’t been performing that well anyway. Still, Notorious Villains has good potential and has shown very good plays before, so they’ll likely prove their strength as the weeks go on.

As for Resurgence, the addition of

(both former Bigetron players) didn’t seem to be paying off in Week 1, but this week Resurgence secured a clean 2-0 win vs Bosskurr, their long-time rivals since Season 1 (when they were known as Flash Tyrants and Airasia Saiyan).

It’s a change in team dynamics, from a squad full of childhood friends to a team that absorbed the players of their defeated rivals Bigetron, but it might just pay off.

And of course, not forgetting our S3 champions, Geek Fam. I wouldn’t say beating up STOP is a big achievement, but it’s still a win nonetheless for Geek Fam, who struggled with their teamwork in Week 1 with the introduction of new players

Let’s hope their captain 2EZ4JEPV can use his leadership skills well and help them out of this slump.