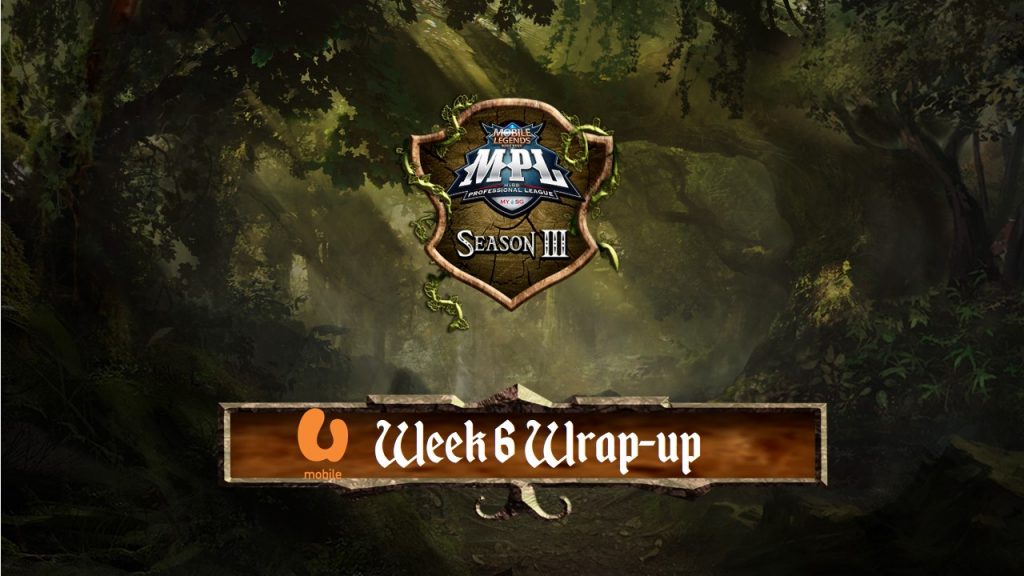 Welcome back to our Weekly Wrap-up of the MPL-MY/SG Season 3 Regular Season. Week 6 was the final week of the Regular Season, with most teams having everything to play for – whether it was to avoid elimination or to secure a better match-up in the Playoffs. We witnessed battles between strong teams, former champions and underdogs to claim their spot in the upper bracket and lower bracket in the Playoffs. Who will claim the championship title for Season 3? Which team will emerge victorious? Make sure you’re there at the Playoffs (20-21 April) to find out! 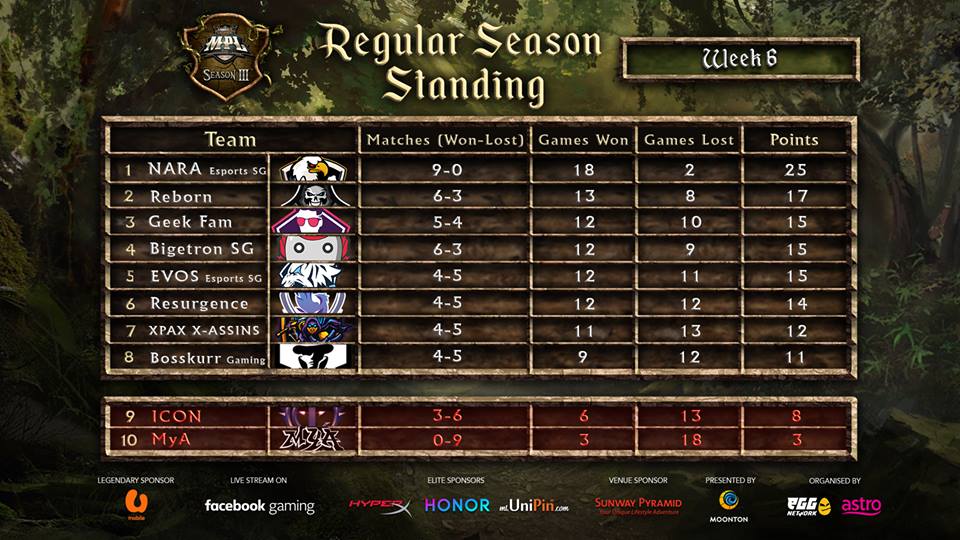 For the first match of the weekend, we saw beleaguered ICON battling against NARA Esports SG – currently top of the standings. It was a quick and easy win for NARA Esports SG in their match against ICON as they take the win 2-0. ICON started the match in a desperate state as they need to win in order to have a chance to qualify for the Playoffs. However, with a strong composition and excellent hero drafting from NARA, they made it really difficult for ICON to beat them. Our King of KDA, Fenrir from NARA played Lunox in the first series and managed to produce high magic damage and secure important objectives for the team. The same went for Game 2 when ICON tried to fight harder to make a comeback with good hero drafting, but it wasn’t enough as NARA kept playing consistently and having fallen too far behind, ICON were finally brought down.

The second match saw improving XPAX X-ASSINS face highflying Malaysian team Geek Fam. Despite being underdogs, XPAX X-ASSINS still put up a strong fight against the best performing Malaysian Team Geek Fam, with XPX taking the win 2-1! Geek Fam looked to have made poor decisions in their hero drafting; their poor composition with no real damage dealer in teamfights and meant that they were too dependent on Dominus’ Guinevere. Even then, her damage output wasn’t enough. In Game 2, Geek Fam drafted better and easily secured the victory. However, that was not enough as XPX came back stronger and their Game 3 strategy was all about securing objectives. Nami’s Helcurt finally brought XPX victory after his constant split-pushing left Geek Fam torn between defending and teamfighting, and he managed to sneakily seal them a precious 2-1 win.

The first match of the day began with top team NARA Esports SG versus bottom team Mysterious Assassin. In the first game, NARA grabbed control from the beginning till the end with full force pressure and good gameplay strategy. From the beginning, we saw clever rotations and aggressive plays from NARA. Despite picking the meta hero Diggie, Fabby’s Time Journey seemed to have little effect because most of NARA’s heroes did not have much CC to begin with. The second game saw MYA make a comeback with a good strategy. While we were expecting an easy win for NARA, MYA refused to give in and tried their best to make an epic comeback. However, with the high damage output and great map movement from the combination of Fenrir’s Lunox and Fossa’s Kaja, the standings leader finally shrugged off MYA’s efforts, and crushed them to win the match with a 2-0 score.

Next, we witnessed a tough fight between EVOS and Resurgence, with RSG taking the win 2-1. The matchup between EVOS Esports SG and Resurgence was aggressive with EVOS dominating the play from the beginning. JPL played Minatour and essentially functioned both as a tank and a damage dealer for EVOS, allowing them to take game 1 convincingly. In the second game, many were expecting a clean victory for EVOS (who has been struggling recently), but in the late game Resurgence managed to hold their ground and a couple of good teamfights gave them enough advantage to tie the series at 1-1. Game 3 was another close affair, but Resurgence looked to have returned to winning ways with a solid performance.

Ending with the most anticipated match of the day: XPAX X-ASSINS against Bosskurr Gaming. Bosskurr needed at least a 2-1 score to secure themselves a Playoffs spot, but they continued their recent hot streak with a clean 2-0 sweep. Bosskurr’s Logan played Grock and managed to get the Game 1 MVP with great teamplay. The early game was difficult for Bosskurr, however, their damage output increased as they reached the late game which finally gave them the victory. In the second game, both teams appeared to be more objective-focused through split pushing rather than engaging in head-on teamfights. However, Bosskurr’s greater experience gave them the edge over the newer team and the 2-0 victory secured their slot in the Playoffs.

The first match was a battle of the champions: Bigetron SG (Season 1 Champion) vs Reborn (Season 2 Champion), with the defending champion earning an impressive 2-0 win! Bigetron SG came into the series at top form, however, in minute 14, Loong from Reborn was phenomenal on his Claude in a crucial teamfight. He used his second skill – Mirror Image – to enter and exit teamfights to secure a game 1 victory for Reborn. In the next game, we saw Reborn thrashing Bigetron after snowballing off a good early game start. They maintained their momentum in the game and capitalised on a series of silly mistakes from Bigetron SG (a team wipe and failure to take objectives) to end the game in just 8 minutes.

The final series of the Regular Season was between archrivals Bosskurr Gaming and MYA. In the first game, Bosskurr took an easy win against MYA with active rotation and MYA looked less than their best. Even though MYA was already eliminated, it didn’t stop them from putting up a strong fight in game 2. Surprisingly, in the next game, Fredo and Penjahat from Bosskurr used an old meta – Fredo’s famed Alucard and Penjahat’s Fanny. MYA took advantage of that and used Bellerick to counter both heroes and managed to win Game 2. Not wanting to give up, Bosskurr stuck to their previous draft and amazingly overcame MYA’s attempt to counter pick them. Their bold and entertaining strategy was enough to bring Malaysian heartthrobs Bosskurr Gaming to 8th place in the standings, and the final spot in the Playoffs.

That’s it for our final week of the MPL-MY/SG S3 Regular Season! A big congratulations to all the teams who managed to secure their place and qualified for the Playoffs. For the upper bracket, we have NARA Esports SG, Bigetron SG, Reborn and Geek Fam. As for the lower bracket we have EVOS Esports SG, Bosskurr Gaming, Resurgence and XPAX X- ASSINS. Get to know more about the Playoffs and your favourite teams at the Mobile Legends: Bang Bang official Facebook page!