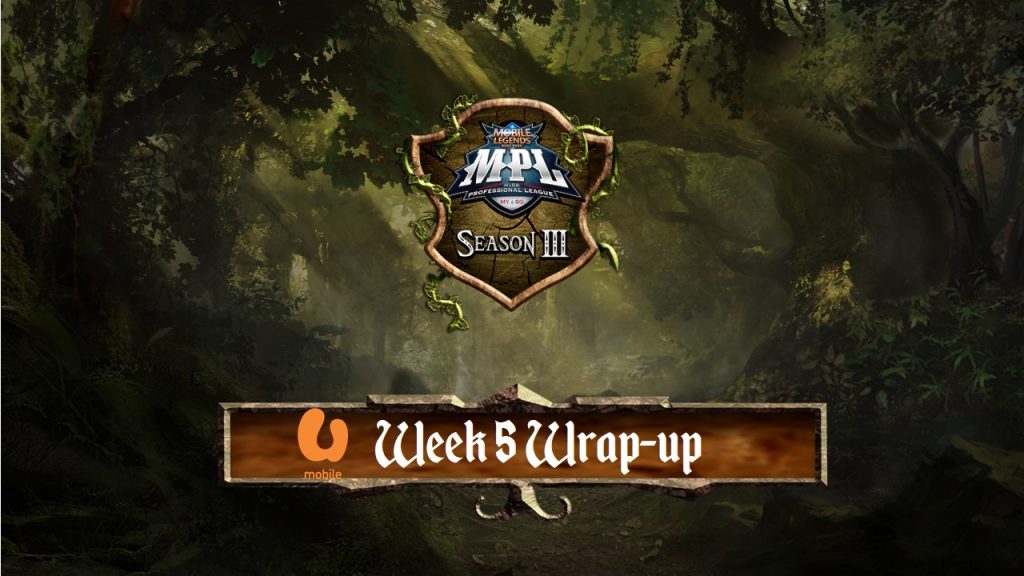 Welcome back to our Weekly Wrap-up of the MPL-MY/SG Season 3 Regular Season. What an exciting start to week 5 with some interesting games between league favourites and underdog teams. Over the past few weeks of the Regular Season, the stand-out team has definitely been NARA Esports SG – the only team to have maintained a near-perfect record. That record stays with them. Besides NARA, Malaysian favourites Bosskurr Gaming kept their Playoffs hope alive with a crucial victory over ICON.

In the first game, XPX came up with a best composition in the early game. XPX focused more on getting objectives and having individually gifted players like Smooth’s Lunox and Arab’s Chou. It was a tight battle between XPX and Reborn with the underdogs win the first game. However, their success was short-lived as Reborn recovered from a weak first game and showed why they are the defending champion. Solid all-round performances from them allowed them to storm past XPX relatively easily in the next 2 matches.

Concluding day 1, the Season 1 champions, Bigetron SG took down Resurgence in a tight 2-1 score. Both teams were evenly matched at first, but it was Bigetron SG’s Mr.Vi on an uncommon pick – Estes – which proved vital in sustaining the lives of his teammates. They played aggressively, pushing their heroes to the limits and slowly, but surely gained momentum before finally defeating Resurgence.

In Game 2, the flow of the game was more back and forth. Bigetron SG gained an advantage and could have ended the game early, but in the end Resurgence held fast and they capitalised on BTR’s mistake to steal the victory through LuN’s Leomord and Xian’s Guinevere – both of whom got maniacs in the game!

Despite putting up a solid performance in Game 2, Resurgence failed to hang on to their momentum and one last teamfight mistake in Game 3 ultimately cost them the series.

This week we saw the strongest Malaysian team at the moment, Geek Fam, started their series slowly and surprisingly lost to MYA in the first game. The battle between Geek Fam and MYA was intense, with MYA primarily playing for pride because mathematically, if was close to impossible for them to advance to the Playoffs. MYA took early advantages in terms of gold and high damage output from Lmao’s Lunox and Kucing Gebu’s Leomord power spike eventually led them to only their second game won.

However, in the next two games, MYA once again played too defensively and lost too many early teamfights, which led to consecutive losses to Geek Fam. Geek Fam finally shrugged off their lethargic game 1 performance with a better draft and cleaner execution. The second and third games were a breeze for Geek Fam, who cemented their spot near the top of the standings.

Malaysian sweetheart, Bosskurr Gaming started this series amazingly. Their previous match victory over high-flying Geek Fam seemed to rejuvenate Bosskurr. They played more strategically and put up a performance to win back the hearts of their fans. Bosskurr captain’s, Fredo played Chou in the series perfectly to help his team with damage output and crowd control. ICON who started the Regular Season well has experienced a slump in their performance and this 2-0 defeat puts their Playoffs dreams in jeopardy. In the second series, Soloz put up a scintillating performance on his Gusion, earning his team 3 important points as they keep their tournament hopes alive.

NARA Esports SG started the week with the full force against Resurgence, winning early in game 1. The game 1 was quite long up until 18 minutes when NARA decided to have uncommon picked which is Uranus for their first draft. The draft does not work well at first as we saw Resurgence totally ran wild over their rivals, but when it come to the late game, Then NARA totally turned over the game and won first series when NARA’s Eric who played Claude extraordinarily.  In the next series, Resurgence tried to fight harder and pulled out amazing strategy thus, finally emerged victory in the series. However,Fenrir who was phenomenal on his Lunox able to produce high damage output thus, managed to disrupt Resurgence momentum and eventually claim final victory for NARA!

Reborn, the defending champion took down ICON with a 2-0 score. ICON once again played too defensively and lost too many early teamfights. A good strategy from Reborn helped them to swiftly kill Lord and then march casually into ICON’s base. Silo’s Helcurt’s clever itemisatio of ‘Immortality’ changed the fate of the last teamfight and Reborn managed to take down ICON.

Game 2 was more interesting with ICON taking the initiative to play more aggressively. ICON’s Kuja played Chou to do split pushing and led his team to control the game at the beginning. However, most of the Reborn team bought defensive items which made them extremely difficult to kill. Finally, the 23-minute game ended with one mistake from ICON in a teamfight, and Reborn scored another convincing victory, leaving ICON in serious danger of missing out the Playoffs.

This was the most anticipated match of the week as the rivalry between Kolia and his former team EVOS have been brewing over the past few weeks. It was arguably a sweet victory for Kolia who found himself no longer an integral part of the EVOS squad and thus left.

These two strong teams were very aggressive, with NARA gaining a slight advantage in the first game with good game rotation and continuous split pushing. Kolia’s Grock surprisingly bought ‘Bloodlust Axe’ and ‘Rose Gold Meteor’ to make him as much a damage dealer as well as a tank.

EVOS tried their best to fight back in Game 2, but NARA shrugged off their efforts, winning their seventh consecutive league match. NARA focused on map control and securing objectives to dominate the game, and they made little to no mistakes for EVOS to capitalise on. NARA’s Eric played Kimmy in the last game and got himself a Maniac to seal an important victory for his team.

That’s it for our fifth-week MPL-MY/SG Weekly Wrap-up! Get to know more about your favourite teams and do not forget to watch all the MPL matches live on the Mobile Legends: Bang Bang official Facebook page. We are entering the final week of the Regular Season, and at the bottom of the standings, 3 teams are in danger of being eliminated from the Playoffs. Will Bosskurr, ICON and XPAX X-ASSINS do enough to advance? Whereas at the top of the standings, teams will battle for a spot in the safety of the Playoffs upper bracket! 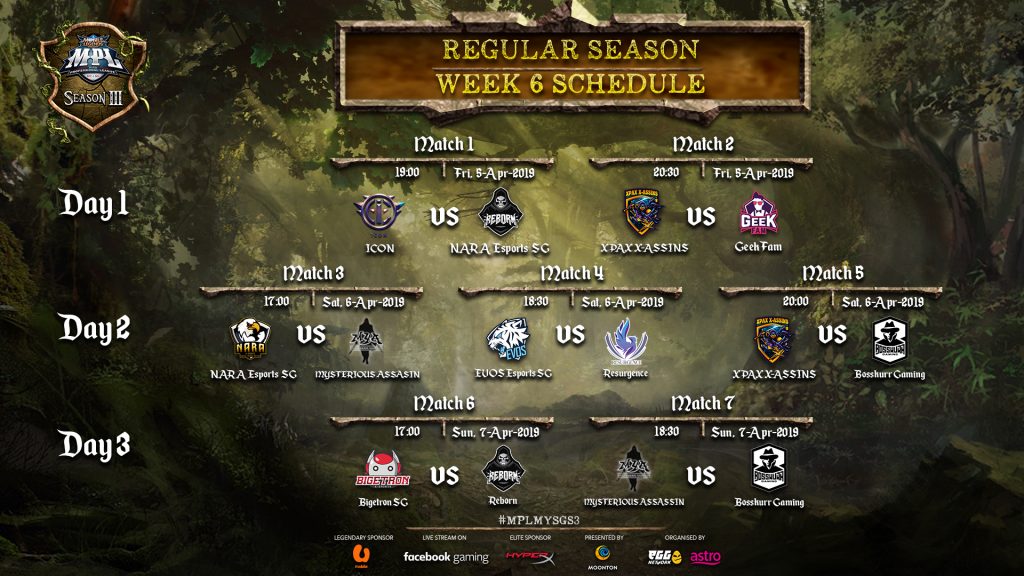