The ‘Playoffs Curse’ (where the Regular Season standings leader fail to perform at the Playoffs) happened again when the only Regular Season undefeated team and tournament favourite, NARA Esports SG, who lost their first upper bracket matches and then their lower bracket match, were  eliminated from the tournament. Unfortunately, the three Malaysian teams including Reborn, Bosskurr Gaming and XPAX X-ASSINS failed to make an impact either and were sent home. Geek Fam is now the only Malaysian team to stand a chance of winning the Playoffs title.

Performing well in the Regular Season doesn’t mean anyone will succeed at the Playoffs. Regardless of how strong NARA Esports SG were during the Regular Season, they seemed lost and uncertain in the 2 matches they played. NARA seemed to have lost their Regular Season momentum. On the other hand, Bigetron SG looked stronger even without influential player Ly4Ly4Ly4’s presence. They shared in their pre-match interview that Ly4 is both their strength and their weakness. BTR fought fire with fire, going aggressive in all three games to meet NARA’s own aggressive play. Their strategy worked and they next face Geek Fam in the upper bracket.

This match was a roller coaster ride. The games were tight and intense and the third game took 29 minutes to finish! It was an emotional victory for Geek Fam. They were an average team before Season 3 but have gradually grown into a mature squad. Feekz was even seen tearing up right after they defeated defending champions Reborn. With this results, Geek Fam made it to the upper bracket finals of the MPL S3 playoffs! They have a great record against Singaporean teams and will surely look confident to face Bigetron SG in their next match.

EVOS were totally demolished in Game 1 in just 9 minutes due to their inability to pressure the map and contest objectives. And with the home crowd cheering, many thought Bosskurr had a chance to redeem themselves. However, we did not see a repeat of last season’s Cinderella story. EVOS bounced back from their Game 1 defeat to play consistently and with a cleaner team composition. They successfully built a strong lead in the next two games, silencing the home crowd and knocking fan favourite Bosskurr Gaming out of the competition.

XPAX X-ASSINS came into the tournament with confidence that they could make an impact. Furthermore, Resurgence were looking shaky due to changes to their team roles. Nevertheless, the X-Assins were soundly defeated in both games as Resurgence finally hit their stride. The Singaporean squad’s experience helped them stay calm under pressure and they earned a comfortable 2-0 victory over a tame X-Assins line-up.

The battle of rivals between EVOS and NARA finally ended with EVOS claiming their revenge! During the season, people kept asking, between OhDeerBambi and Kolia, who made the right choice? Whose decision would prevail in the end and who was right? We finally got an answer. NARA triumphed over EVOS during the Regular Season, but they looked out-of-shape and out of form. They tried to put up a fight against EVOS but the White Tiger’s momentum from their previous victory over Bosskurr Gaming was enough to propel them into the next round – and to end NARA’s dominance of MPL-MY/SG Season 3.

Game 1 was a schooling by Resurgence as they took the gold lead within minutes of the game. Reborn tried their best, stalling as long as they could, but it just wasn’t enough. Reborn put up a better showing in Game 2, but they failed to fully control the map and pressure Resurgence. The Singaporean veterans won important teamfights to slowly claw away Reborn’s early lead and from then on, it was downhill for the defending champions. With this loss, they finished joint 5-6th with NARA Esports SG – surely a disappointing end to their Playoffs run. 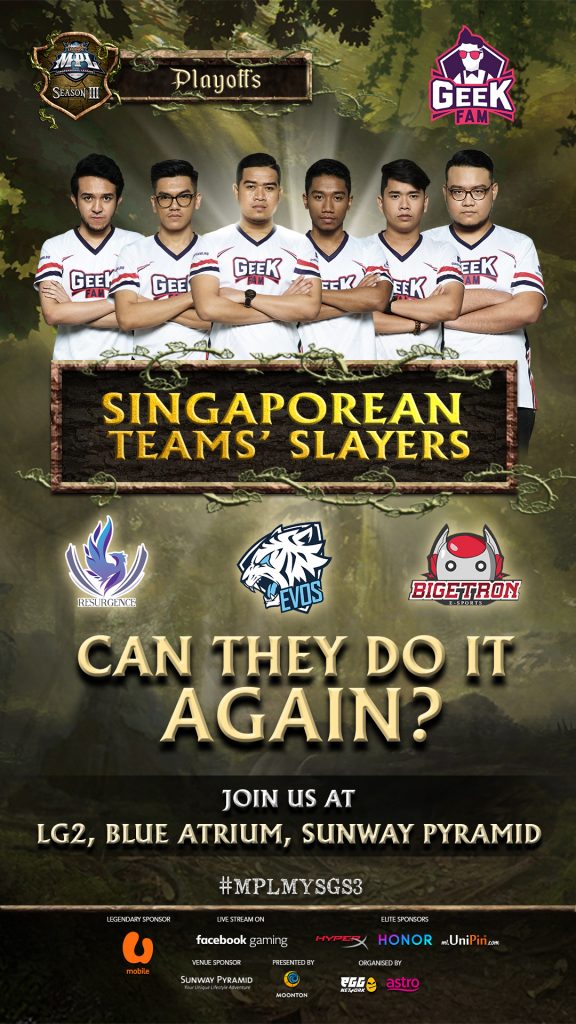 Congratulations to all the winners! On Day 2, only one Malaysia team remains to defend their title on home ground with 3 Singaporean teams remaining in the MPL-MY/SG Season 3 Playoffs! Geek Fam has beaten all 3 teams during the Regular Season, but we’ve seen how Regular Season performance is not a guarantee of success (NARA and Reborn were top 2). Will Geek Fam be able to defeat Season 1 Champion, Bigetron to make it into the Grand Final? Meanwhile, which of the 2 lower bracket Singaporean teams (EVOS and Resurgence) avoid elimination and grow their chances of winning the Playoffs!

Join us at LG2, Blue Atrium, Sunway Pyramid at 1pm and feel the passion! Or you watch the match LIVE on eGG Network Plus (Ch 807 on Astro, NJOI, & Kristal Astro).