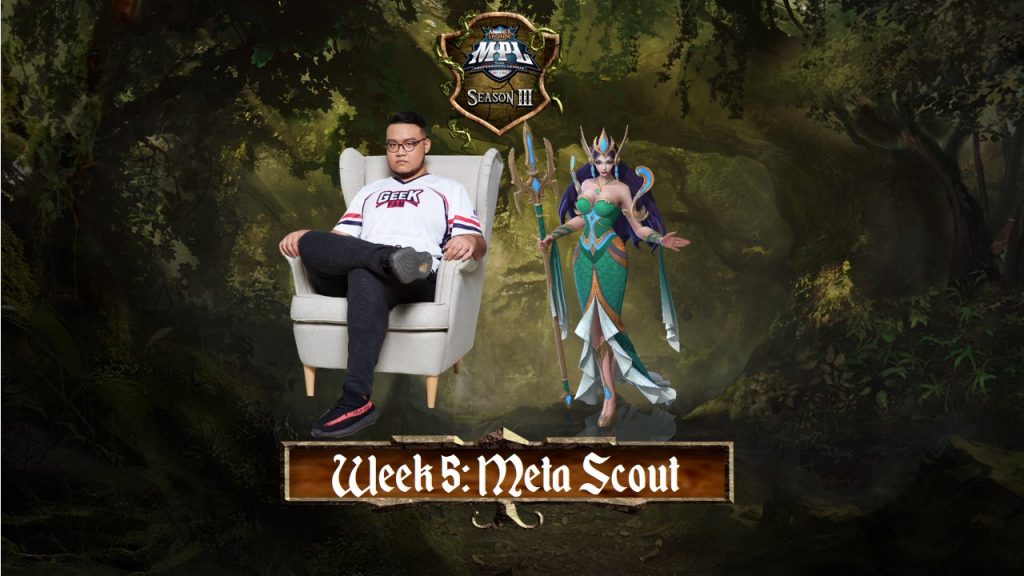 Welcome back to a new episode of MPL Scout! This week, we wanted to touch again on the most popular mage hero, Kadita, and consider her impact on the MPL-MY/SG meta. As we analyse these heroes, we will observe different play style from Geek Fam’s Dominus on how he played Kadita. What would be different in their playstyle? Let us find out how Dominus put up an admirable performance on Kadita in Geek Fam’s match against Mysterious Assassins and successfully being crowned the U Mobile MVP of week 5.

Throughout week 5 of the MPL-MY/SG Regular Season, we can see Kadita is one of the favourite mage to be picked during hero drafting. She is powerful and in terms of playstyle, she’s a mage hero that can positioning and spell-landing at the right moment to change the tide of battle. According to Dominus, “There isn’t any best way that you could play in a Kadita role. I feel that the most important thing is that you must understand and know how to fully utilize her roles”.

Examples include knowing when to either help out teammates or take objectives in the game, or dealing with the turtle or lord as a group. According to Dominus, player who prefers to dive in and out of the battle while assassinating targets then you would find Kadita to be a fit for you as her ultimate can easily burst down unsuspecting enemies. We saw in the match against MYA Dominus managed to assess the right moments to dive in and out of teamfights using her high mobility, creating havoc, and dealing huge amounts of damage.

In the match with MYA we saw Dominus’s Kadita item build largely focused on high damage output and CD reduction. Based on Dominus, he suggested that the first Kadita build item that you have to use is ‘Lightning Truncheon’ before buying ‘Wizard Boots’. Because this item can increase Kadita’s damage every 6 seconds based on the number of mana owned. He then suggested to add ‘Clock of Destiny’ to give some mana from Kadita stat and her unique passive. This mage are really good with this synergy item thus, it can make her more powerful in the battle.

Kadita is known for her naturally good defensive abilities, so Dominus opted for ‘Fleeting Time’ and ‘Necklace of Durance’ to provide magic damage and dealing damage to enemy target respectively. Especially with this item, Kadita’s ultimate cooldown skill can be very fast, approximately 7 seconds! Even though he did not manage to complete his items, he made good use of Kadita’s strengths and had teammates who enabled him to perform well in teamfights!

For Dominus, the best emblem set for this hero is the Mage emblem. According to him, players can use Mage emblem on Kadita with the talent Magic Worship. This will surely help players to dealing damage, burns the target and has a great effect on cooldown. As for the spell, he recommended Petrify as it temporarily stuns enemies and stops them in their tracks – something especially useful in teamfights. Besides, player can also used Retribution to farm faster and get their item build finised early.

Player should try to farm for level 4 to get their ultimate quickly. Besides, player must try to land combo for kill after getting their ultimate.

During mid game, the important part is to help in teamfight! For some trick in playing Kadita, player should try to gank other lane and hide in any bush for a quick kill because Kadita’s unexpected burst can surely kill anyone in instant!

Lastly, when it come to late game, player must try to land knock up to at least 3 or more enemies in teamfight and become one with the sea to get in the backline to burst the core hero. This will help the team to win the teamfights and reached game objective to win the match.

Catch Geek Fam’s Dominus in action this weekend as we approach week 6 of the MPL-MY/SG Regular Season!