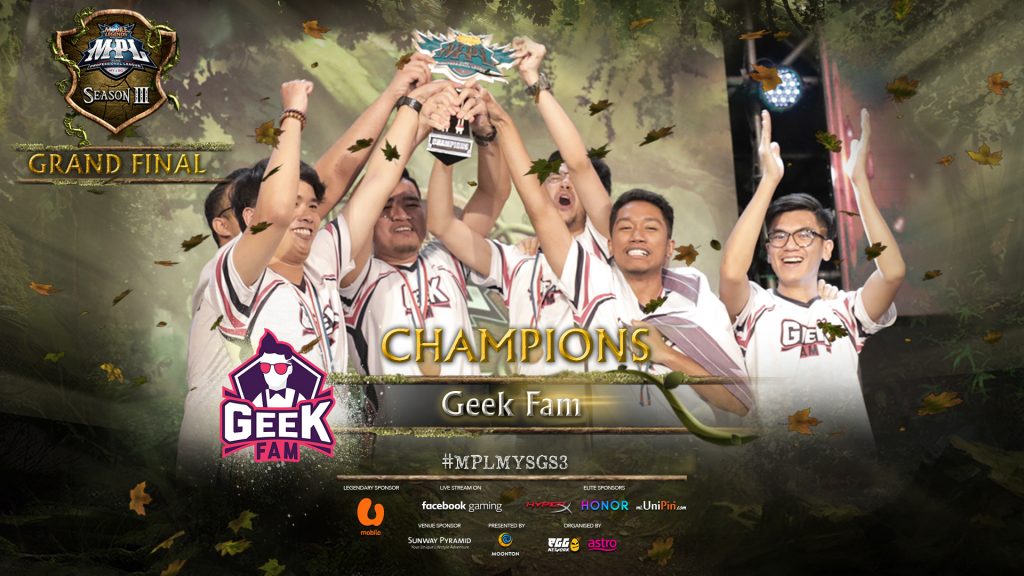 The most anticipated Mobile Legends: Bang Bang event of the season is finally over. Firstly, Congratulations to Geek Fam Mobile Legends for battling hard in the Grand Finals and becoming the Champions of MPL- MY/SG Seasons 3.They managed to defeat Singaporean team, EVOS Esports SG and took home the MPL trophy and a cash prize of USD 25,000!

The final day of the MPL-MY/SG Season 3 Playoffs was absolutely crazy! During the day, we saw EVOS Esports SG showing their strength of will after winning both of their lower bracket matches against fellow Singapore teams. Perhaps exhaustion had its toll as they ultimately fell to the Singaporean team Slayers, Geek Fam, who claimed the championship title. Season 1 champions, Bigetron SG, finished third and Resurgence finished fourth. 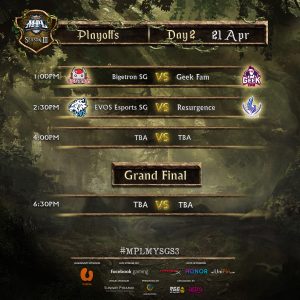 We started the day with the upper bracket match between Malaysia’s Geek Fam and Singapore’s Bigetron SG. This was one of the most widely anticipated matches of the final day, because a victory for Geek Fam would guarantee a Malaysian team in the Playoffs.

Geek Fam started their day with a bang! They did really well in Game 1, controlling the map and not making many mistakes. However, the home crowd looked disappointed when Bigetron SG took Game 2 with BTR’s Sync playing his Lunox extremely aggressively. Geek Fam bounced back from their Game 2 defeat to play consistently and with a cleaner team composition. In the early stages of the game, both teams were on par, but after Geek Fam managed to secure Lord, they played more aggressive which unnerved Bigetron enough to secure their first MPL-MY/SG grand final appearance!

The Singaporean civil war began between the two Singaporean teams, Resurgence and EVOS. Game 1 saw EVOS utterly steamrolling Resurgence with great teamwork and a strong hero composition. However, Resurgence’s desire to win MPL-MY/SG Season 3 was strong, and for the second game, they decided to switch up their overall strategy – completely demolishing EVOS, and won Game 2. However, EVOS was still EVOS, and with strong individual skills combined with OhDeerBambi’s great mind, EVOS finally aced the game and they earned their place in the lower bracket final against Bigetron SG.

Bigetron SG was a strong contender to be the 1st 2-time champions for MPL-MY/SG. They preferred running a 4-1 composition, leaving their offlaner on an island. That proved surprisingly effective during the Regular Season, but against their opponents, EVOS. We saw BTR’s Mr. Vi’s Johnson put up a breathtaking performance which sealed them Game 2’s victory. However, EVOS won Game 1, and BTR’s strange decision to pick Gord in the final match proved ineffective against EVOS. The Singaporean White Tigers extended their winning streak and had a lot of momentum going into the grand final. 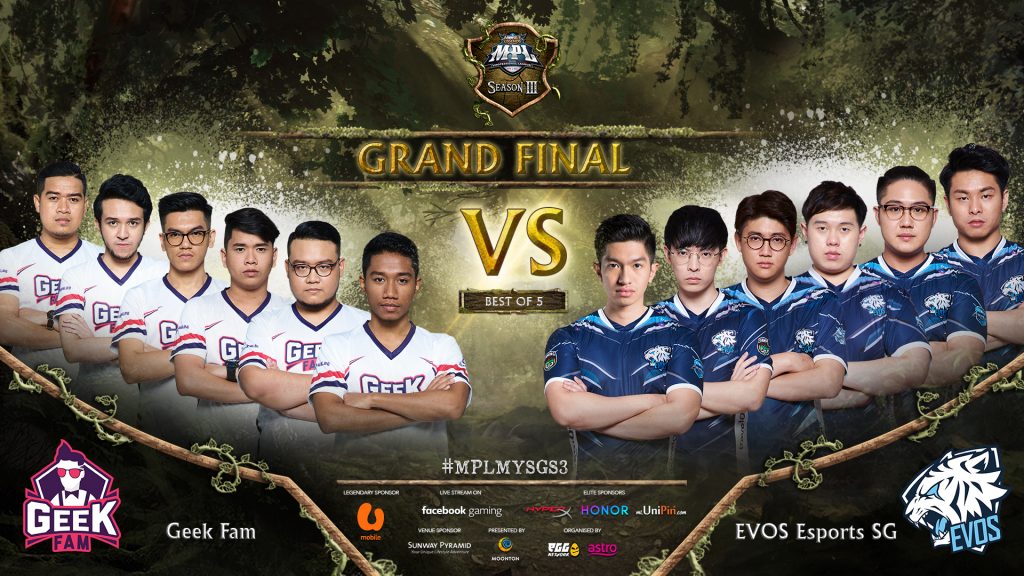 Well, this was a crazy match-up between the current best Malaysian and Singaporean team!

It was the climax and most widely anticipated match of the day when Geek Fam started the match with full energy. They took an easy win against EVOS with extremely great plays from Geek Fam’s Dominus on his Gusion. Dominus even managed to get a Savage in the game and it was a complete stomp. The final score? 41-22. Dominus had 24 kills – that was more than all of EVOS combined. Crazy right?

However, EVOS were not going to bow out tamely and in the second game picked a new teamfight-heavy lineup with OhDeerBambi who dominated on his Lunox and secured Game 2! The victory proved that after being placed place 2nd in last season, EVOS wanted to come back stronger and wiser to bring the championship title back to Singapore.

Nevertheless, Geek Fam managed to hit their peak with a new strategy. We saw an uncommon pick – Angela used back-to-back in Games 3 and 4 to give them victory. The final game was hilarious when Geek Fam decided not to use a traditional tank to go against EVOS who drafted 2 tanks in their line-up! At the start, EVOS controlled the pace of the game which made Geek Fam take risks and play somewhat rashly. However, Geek Fam shocked EVOS by fighting hard and pulling out every trick in their book and eventually managed to win the series and the MPL-MY/SG Season 3! 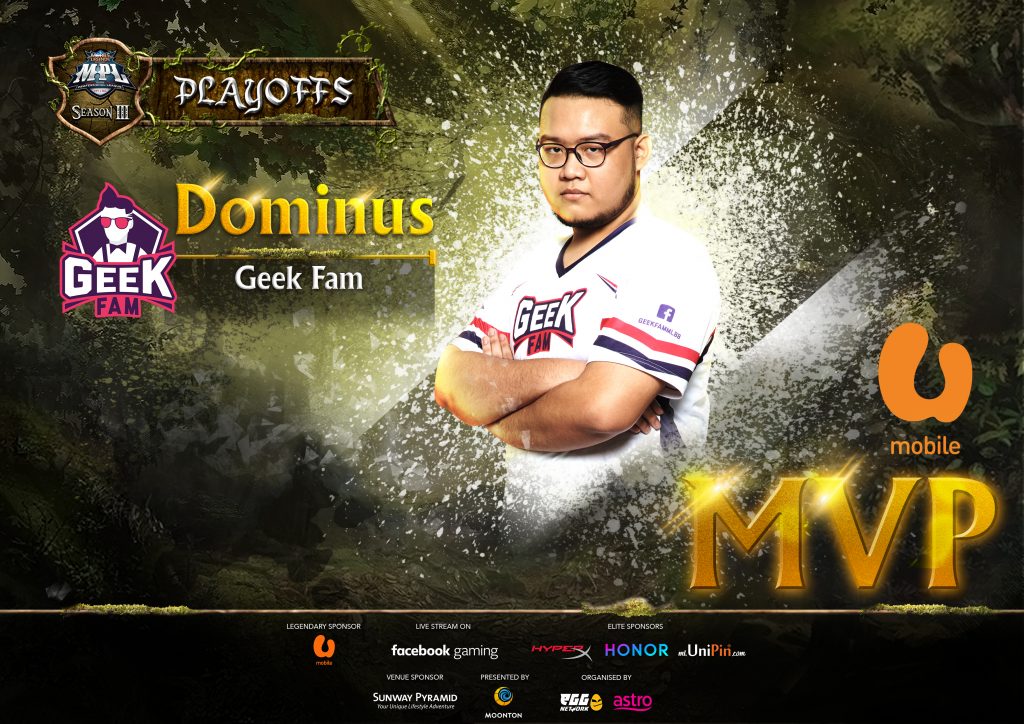 No Tank, No Problem! Geek Fam proved themselves a true hero of MPL-MY/SG Seasons 3 and winning the Championship title sealed their status as legends! A big congratulations to them!