Welcome back to our Weekly Wrap-up of the MPL-MY/SG Season 3 Regular Season. Week 3 has been another interesting week, with all matches played between old foes. Malaysia’s fans voiced their disappointment with how a lot of teams in week 3 seemingly threw away games that could have been won against Singaporean teams. Most of the matches were clean (2-0) sweeps in favour of stronger teams, although we did see a number of impressive upsets. 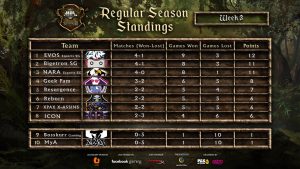 NARA started the week with the full force against Geek Fam, winning 2-0 in a comfortable fashion. Unfortunately, the previously dubbed Singapore slayers was found wanting in the week’s opening match. Geek Fam drew first blood but in that same fight, NARA killed 3 in return. From then on, it was all about the Singaporean squad. Kolia who used Minotaur in the first game, stifled Geek Fam’s momentum in the game. With self-healing abilities and increased physical defence and magical resistance, Minotaur was a beast when it came to tanking enemy damage and protecting his teammates. In this game, we managed to see more objective focus in split pushing rather than engaging in teamfights. The commitment shown by NARA to control the map granted them easy victories for both games.

Bosskurr Gaming started the series on the wrong foot with a poor draft. They played sloppily, ymaking a lot of mistakes and bad decisions in teamfights. These gave Reborn the lead in both games. They surprisingly decided to pick Hanabi, hoping that they could survive till the late game. Unfortunately, Hanabi’s skills only focused on dealing damage and crowd control, with little escape. In a meta where mages and fighters dominate, Hanabi just died too quickly and had little opportunity to show her true potential. Reborn had a better line-up and playstyle. They picked up an early gold lead and maintained it throughout both games, allowing them to buy better items that deal high burst damage. The same mistakes made by Bosskurr again in their draft pick for the next match. With the lack of tank abilities on their heroes, it was indeed a nightmare for Bosskurr to sustain themselves in teamfights. Thus, Reborn claimed a relatively easy win over their former sister squad.

The second day began with a promising match between ICON against Bigetron SG. Ly4 from Bigetron SG played Kimmy in the first game well, understanding the strengths of the hero and coordinating with his team for well-executed teamfights and turret pushes. ICON seemed useless and helpless, because of the extremely high gold and level difference. Bigetron SG  definitely had the gameplay skills to take advantage of their lead. They made few mistakes, had expert game positioning – looking like the side that stomped to victory in MPL Season 1. An added advantage for them was having a good tank to initiate teamfights. However, their win was also thanks to a surprisingly dismal performance from ICON who started the season well, but has since suffered a severe slump in form. They are currently the 8th placed team in the standings, occupying the final Playoffs spot.

Resurgence totally ran wild over their rivals, stomping over the underperforming Malaysian team, Bosskurr Gaming, to claim a 2-0 score. Bosskurr were once again too passive in their approach and failed to disrupt Resurgence’s game plan. Non-stop split pushing from Resurgence secured map control for them, however, they still struggled to close out the game. Towards the end of the first game, Fredo who played Gusion, managed to save their Base with an impressive solo performance, even wiping out Resurgence. After that, they tried to fight harder to make a comeback, but it wasn’t enough as Resurgence kept playing consistently and having fallen too far behind, Bosskurr were finally brought down. The same went for game 2, and once again the crowd favourites fell tamely to their 5th consecutive defeat in the league. And they are seriously in danger of missing out the Playoffs.

XPAX X-Assins, one of the underdogs of MPL, has been steadily improving since week 1. We saw an exciting closely-fought series between these sister squads. During the first match, XPAX X-Assins gained control of the game with a high gold and level lead. They often grouped up as 4 to gank enemies. With their high damage output and great map movement, they shrugged off MYA’s efforts, and crushed them to win game 1. While we were expecting an easy win for XPAX X-Assins, MYA refused to give in and took game 2 after successfully defending their base from numerous attacks. The X-Assins made plenty of mistakes and a bad teamfight in which they were wiped lost them a thrilling game 2. However, the X-Assins learned from their mistakes and in game 3, showcased another dominant performance to finally win the series 2-1.

The matchup between EVOS Esports SG and Geek Fam was aggressive, with EVOS gaining an early lead in the first game but carelessly threw away their advantage in the subsequent 2 games. Many were expecting a clean victory for standings leader EVOS again, but Geek Fam took game 2 using an uncommon Rafaela pick. She was played by 2ez4Jepv and he combiend well with Xorn’s Grock to ensure Geek Fam maintained map control and could sustain the high damage output dished out by EVOS. Geek Fam sealed their victory against EVOS with an amazing draft in game 3. Dubbed the ‘Singaporean Slayers,’ Geek Fam have only lost 1 match against a Singaporean team – NARA Esports SG, and have defeated the other 3. That’s an impressive feat considering the current dominance of SG teams in MPL.

The previous night’s victory for XPAX X-ASSINS was a big confidence booster for them and they came into the series with all guns blazing! ICON in game one took map control in the early game but did not manage to build on their momentum. Kuja on his Helcurt partnered well with Syno’s Kaja in game 1. However, the X-Assins read the game well, understanding the strengths of their own line-up, and the weaknesses of ICON’s. They built their heroes to sustain all the damage ICON dealt, and then only went in for hero kills. ICON tried their best to fight back in game 2, but XPAX X-Assins shrugged off their efforts, winning their second consecutive series, and climbing over ICON into 7th place.

The final match of the week saw Bigetron SG, the former Season 1 champions, thrashing Mysterious Assassin 2-0. MYA actually looked to have excellent map control in the first game. However, Bigetron SG managed to stabilise during the mid game. Furthermore, a series of silly mistakes (a team wipe and failure to take objectives) led to BTR retaking the lead and winning the game. Ly4 was unstoppable on his Lancelot (now a rarely picked hero) and even got maniac in the final game-ending teamfight. With this win, Bigetron SG move into second place in the standings, just one point below leaders EVOS Esports SG.

That’s it for our third-week MPL-MY/SG Weekly Wrap-up! Get to know more about your favourite teams and do not forget to watch all the MPL matches live on the Mobile Legends: Bang Bang official Facebook page. We’re midway through the Regular Season, will Singaporean teams continue their dominance or will Malaysian teams muster a rally in the second half of the season? Stay tuned next week to find out!