The Top and the Drops – MPL Casters Predict The Final Standings. 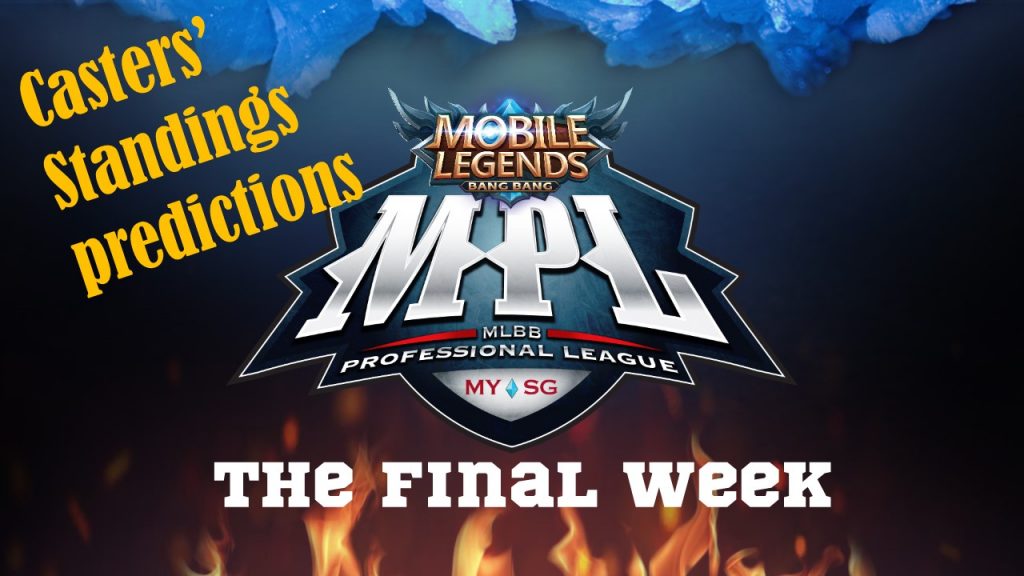 In the buildup towards the final week of the MPL regular season, some of our casters’ shared their thoughts on how the top and bottom halves of the final standings will look like. Before we hear from them, this is the current league standings:

To top the standings, I will vote for Team Saiyan followed by IDNS SG in 2nd place. Although Team Saiyan looked pretty shaky last week against Tyrants due to the absence of HawkEye, I think this is a good chance for Gripex to gain more experience. I believe they will perform better against IDNS SG this week. Although the kill difference is heavily in IDNS SG’s favour, I do believe Fredo and the other Team Saiyan boys will give the Malaysian squad a 2-0 win.

For the bottom 2 teams, I think its gonna be Equalizer and Louvre SG. Equalizer haven’t discovered their real strengths or a suitable gameplay yet. They are struggling at the moment and this week they will face Tyrants and Mystic Burden, 2 solid teams. As difficult as it is to say this, I don’t see them winning all 4 games. For Louvre SG, they will face MyA3 while the team just above them in 8th place (and currently holding the final Playoff spot), Falcon 7 will be against Mystic Burden. I think Louvre SG will drop because Falcon7’s performance right after the mid season break has been smooth. They are playing much better individually, and as a team. Whereas the Singaporean team still seems to be struggling to find their own form.

Team Saiyan, the No. 1 powerhouse of Malaysian Mobile Legends has never failed to amaze us with their skills and continue to hit higher ceiling levels both individually and in terms of team chemistry! They have been playing their best for this league and they are gunning down teams with their superb all-around skills and heavy objective-based mindset. That has helped them succeed even when they seem to be falling behind, and that will be their blueprint towards victory against their Singaporean counterpart.

Bottom: Equalizer, our only team from East Malaysia had a great qualifiers to be selected as a wildcard for the regular season. Unfortunately I think their run will come to an end with a bottom placing. The lack of sharp execution, inexperienced team play, and often getting outplayed by their opponents showed that they have still plenty to learn! However, they are still one of the most positive minded teams and I’m looking forward to their return in future seasons.

Regarding 9th place, I think it’ll be Falcon 7. Despite having some great wins and an improving play style overall as a team, its a little too late for them to get that final spot of the playoffs (8th placing) due to the odds against them (Kill difference, as well as a last match against MCB (one of the top Malaysian teams within the league). Unless they are able to show us a strong performance, like against MyA3, they are still in a hot pot of soup and at risk of being eliminated out of the Playoffs. Moreover, Louvre SG, on paper, has an easier match-up against an under-performing MyA3.

Team Saiyan all the way! They are full of surprises when it comes to drafting! Going against IDNS SG will definitely be challenging but I believe the level of focus they have on objective gaming is top notch, and might give them a slight advantage. They also have experience playing high-stakes matches so I really hope they deliver!

Also, they are very versatile in terms of drafting so that will definitely help! Perhaps they’ll pull off something like last week’s triple Assassins line-up. I can’t wait to see HawkEye’s Johnson performance!

I think Louvre SG and Equalizer will finish in the bottom two. They have been struggling quite a bit while the others have been showing improvement and have been delivering results. Louvre SG just seems to be hitting a road block that’s preventing them from finishing up good team fights which have resulted in losses. Equalizer on the other hand always seem so troubled whenever things are not in their favor.

Definitely IDNS SG at the top, followed by Team Saiyan. Reason: I think IDNS SG have not really shown much variation in terms of drafts which leads to two conclusions.

a) Their (same) composition has managed to beat everything else. This is insane because for this team, it isn’t the picks or counter picks that matter. It is just solid game play coming out of them.
b) Team Saiyan has achieved good wins as well, but they can be dependent on the draft, with specific players getting the right picks. It is important to note that they do look quite shaky at different points of the season.

When these two teams clash, if Team Saiyan doesn’t win the draft outright, they may just fall.

For the bottom I’d say Equalizer at 10th and Louvre SG at 9th. Reason: Both these teams suffer from inconsistencies in two areas:

a) Drafting – Both teams tend to suffer from not being able to have a solid strategy during their drafts. Unlike IDNS SG who goes back to their comfort picks, the ‘comfort’ picks of these teams fail to impress, this is explained in the next point.
b) Cohesion in gameplay – As a color caster, I struggle to talk about the intentions and execution of these two teams’ ‘strategy’. My best guess is that there are too many shot callers during the game or that there is a lack of shot calling experience in the team. I see a kind of aimlessness about these two teams.

Falcon 7 isn’t immune to these problems, but at least their recent improvements specifically in their cohesion as a team gives them a slight edge to take the 8th spot.

Do you agree with our casters? Let us know and make sure you catch all the action live on the Mobile Legends: Bang Bang Facebook!